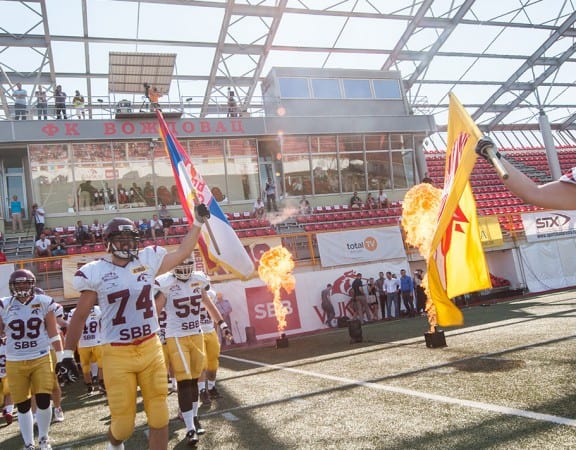 For the second straight year, Vukovi came short in the IFAF Europe Champions League title game. Lesson from Carlstad Crusaders, who won 84-49 in Belgrade, will be long remembered, not just because of defeat, as because of own effort and quality of the rivals.

“It was very hard fought game. And, it was definetly against best team we’ve faced whole year. My players did their best, and I can only congratulate them for that“, said SBB Vukovi coach Brian Mayper, who added:

“We have had almost the same situation last year, when we’ve reached championship game in this competition, and lost it. So, players were ready for this one, we just made mistakes, and they’ve capitalized on them. But, we fought until the end. So, it is hard when you lose, but these guys keep up fighting, and I believe that this will happen now, after the season is over. I told them before the match ‘Whatever happens in the game, leave everything on the field”. And they did. Every single of them gave his best until the final whistle. That’s why I’m proud of them“, said Mayper.

Anthony “Tony” Washington was once again one of the best in the Vukovi team, but even his spectacular catch in the endzone and several moves for the highlight reel couldn’t prevent defeat.

“I went out there to do whatever I can, but it’s more important that all of us went out there as a team. This is what this game is all about, offense, defense and special teams. We’ve never quit, as coach said, but, man, their offense… We just couldn’t find an aswer for it. Unfortunately, we came up short. In my three years in Vukovi, we’ve never faced offense like that. They are very impressive, very well coached, and you, know, if you even have real superstars in your team, very well coached team are very hard to beat“.

Washington, who scored one rushing and two receiving touchdowns in the title game, reflected on the very last moments of the game.

“It was a mixture of all kind of feelings. We never quit, we kept that fire in our eyes, we continued to go forward, but as you watch time going down, it hurts. You don’t come on a such long journey just to be second. We worked all season, we worked really hard, and to come up short, it’s hard to take“, said Tony Washington.